I have been thinking about building a car for a few years now. My previous choice was a Lotus 7 inspired car based on the Ron Champion book. I purchased a Toyota Van as a possible donor, but didn’t have the right space to build it and sold it when I moved. I then bought a Datsun 620 truck that was very rusty and took it apart, tossing the body and keeping the drive train components. It is a good donor, but that project is a little larger than I have room for currently. In addition, the ’74 Datsun engine won’t get much better milage than my Volvo wagon, and since it’s not desmogged, will be putting out more hydrocarbons than I’d like.

A bike build, though not having a catalytic converter, will be more fuel efficient due to its smaller engine and lighter weight of the finished vehicle, so it will burn less fuel, putting out less pollution over all than the Lotus 7 build. The Locost, as the Champion inspired builds are typically referred to, seem to be more oriented towards drivers with an interest in track racing. I don’t have any interest there, so that’s another reason why the three wheeler is a better first choice for a project. I may build a Locost at a later date since I do like the looks of that car as well.

Onward then. While I’ve seen several kits being advertised for the Honda based build, I haven’t found any simple plans available on line. The cost of purchasing a kit, plus shipping it here to Hawaii would be more that my budget can afford. And I like to build things myself, so I’m looking for plans. I did find some old posts from 10 years ago of offers to sell plans, but that’s a huge time in internet time, and we’ll see if any of the posters are still reachable and willing to sell plans now.

I have luckily found the largest component of the build, the engine. Craig’s List provided a link to a fellow selling a Honda CX650 engine and wheels. Sadly there are no brakes, drive shafts or title, so I’ll have to source parts online. Ebay is full of parts, so that much is easy. Getting some assurance that the motor is free of any ties to its former owner isn’t so easy. There are many vehicles that get left on Maui when their owners move away. Not enough time to sell them, not running so too difficult to sell, they leave intending to come back but don’t… the list goes on, so its very possible that this is a free and clear motor. But I need to make sure. 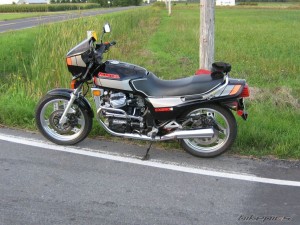 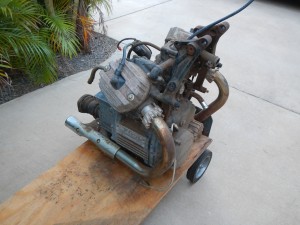 At the end of the project, I’ll have to request a new VIN from the DMV. I have a bill of sale for the motor,  but I’m sure that the inspector for the state will check with a Honda database to see if the associated VIN for the bike is reported as being stolen. I certainly don’t want to put a lot of money and effort into building this car and have it taken away in the end.

Getting that association between the motor serial number and VIN is proving to be harder than I first expected. Several posts online seem to indicate  that its a fairly simple thing for a policeman to do in the course of his duties. I went to the local police station, and requested that the number be looked up. I was told that a reason needed to be input to access the database, and my reason was insufficient. They were unable to help me. The officer suggested that I try the DMV.

The nice lady at the counter told me that they could only look up the VIN numbers, they had no listing of motor numbers. Fair enough, and pretty much what I expected. So next I called American Honda in Torrence. The person there said that while they could verify what motor serial number a particular VIN number had installed, they were unable to look up a VIN from a motor number. So either their database is restricted in some way to prevent this, or the designers didn’t envision that as a possibility and there isn’t a search field for it. All it would take is a simple text file of the numbers and Word or Excel could find the numbers in a few seconds, but no, apparently that isn’t possible.

So, I need to find the state  or county official that will do the verification of the build in the end and get them to check the serial number for me now. I’ll be making some calls to the DMV and find that out. The section of Hawaii state laws that concern this is §286-26.5. I’ll post them in the next blog since they were a bit hard to find online.